New York City’s Warshow Angels create lush, dirty, and seductive retro-futuristic jams that combine the best elements of glam, post-punk, rock, new wave and electro.  Envision a 21st century T.Rex meets Love & Rockets... or perhaps The Lords Of The New Church watching the director's cut of the neo-noir sci-fi classic Blade Runner. Moody, driven, and cinematic. How the debut album came to be is an outré blend of perfectly horrible luck followed by an epiphany, some remarkable timing... and perhaps, fate.

​Vocalist / guitarist / producer Kneel Cohn formerly of The Dead Stars On Hollywood and drummer Todd Bryerton from the activist dance/industrial act Consolidated came together to record a handful of songs intended for a EP at Pyramid Studios in NYC. Those sessions would come to be known as a "beautifully orchestrated disaster" and/or "the menace". The recordings marked the end of a dark chapter steeped in discord and strife. Subsequently it felt more like a goodbye than anything else. Life seemed pretty fucked up, the EP was scrapped and all that time and money was gone.

"It took a final soul-crushing failure to realize it was time to give up the Dead Stars for good and start over. All the other people Todd and I worked with in this band were completely unreliable and then suddenly it seemed like wasn't worth the effort anymore." Kneel recalls.

​In the following months, everything from "the menace" was completely set aside and Kneel started writing songs for a new band and plans of a debut album. With a fresh vision steeped in inspiration, the new tracks (and the best elements of some earlier ones) were reclaimed, edited and re-tracked at Astoria Studios. During the recording sessions a number of friends stepped in to lend a hand as the new project took shape.**

​​For the final mixdown, Kneel reached out to longtime friend and accomplished mix engineer and producer Steve Sundholm at Kung Fu Bakery studio in Portland, Oregon. The mixing process for this album was a vital element and fate seemed to lend a hand in it as well. It was a tiny burned out lightbulb on the mixing board which mysteriously disabled a way to record a digital stereo mix. Thankfully, studio co-owner Tim Ellis stopped by and donated a few reels of tape for a completely analog mixdown which made the album sounded even better. The vintage guitars, pedals, amps and analog synths welcomed the warmth of the studio's SSL 6056E/G console and Ampex ATR-102 mastering recorder further enhancing the album's organic credibility.

​The result is a brash, distinctive although familiar sound all delivered with a strong and refreshing self-assuredness. The memorable songs, clever wordplay and production style have already grabbed the attention of music industry tastemakers including Creation Records' Alan McGee, Sire's Seymour Stein, and international radio DJ Jonathan L. 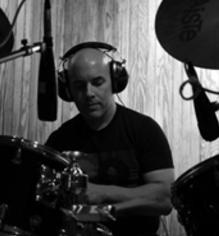 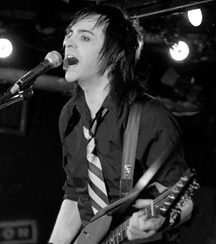 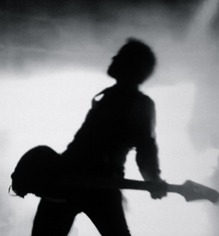 Bolan-esque beats and guitars to industrial/post-punk atmospheres. The 70s, 80s, and the future

in one album, definitely the best surprise of these last months."
~ ​C Laurent (Veglam.com)